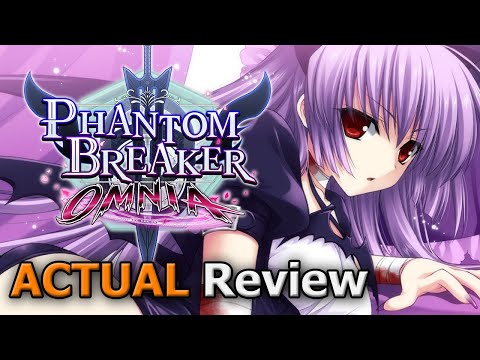 Phantom Breaker: Omnia is and feels like a game of 2011, making it a little behind compared to other more recent games.

Some games are children of a time, a place or a particular sensitivity. This is neither good nor bad, but it does produce an obvious effect: out of that context can easily be misinterpreted, or even seem to be out of place. But precisely for that reason, this is the kind of games that, no matter how long pass, always have some follow-up and a small audience that treats it as a work of worship. Therefore, even when they age badly or do not understand well out of their context, they are interesting as historical pieces, because they never get out of all.

In what concerns us, Phantom Breaker: Omnia is an improved version of Phantom Breaker, a fighting game developed by GameLoop and 5pb (better known for his work within the field of the visual Novels, with titles such as Chaos; Head or Steins; GATE) originally published on June 2, 2011 at Xbox 360 exclusively for the Japanese market. Although he had two reviews, Another Code and Extra, both appeared in 2013 and that they would also take the game to Arcade and PlayStation 3, none of them would come out of Japan. This changes now with Omnia, the first version of the game with an official launch also in the West.

Playably, the game follows the basic profile of the fighting games, but with small features of own personality that make it very interesting. In this way, we have a button for weak blow, another medium and another strong, with the particularity that we have a button for special attack that combined with the address or with the other buttons, make different variations of special attacks. That, added to Overdrive mode, which is achieved and advocating attacks, we can earn an important increase in speed and attack for a short period of time, or use it to make a particularly powerful special attack, thus closing the basic mechanics of the game.

The most striking peak of Phantom Breaker, which has been enhanced in this Omnia, is its combat styles. Before starting the game, in the original we had to choose if we are going to play a quick style or a hard style, determining like this if we will play more looking for the combo or a more defensive style. In this edition, Omnia style has been included, which does not have strengths or weak, but enhances the particularities of each character, being perfect for people who start in the game or gender, but also for those who want to emphasize the particularities of His fighter, an addition that is not substantial, but adds an extra layer of personalization to the game.

Consequently, it is important to talk about his characters. Because with a wide _roster, having twenty-two characters where to choose, the characters feel different enough among themselves so that these style changes have a strategic sense. While it is true that most do not break excessively with the archetypes of the classic fighting games, except for one of the guest characters – Kurisu Makise, Steins, Gate, who fights with scientific artifacts instead of with pseudomagic powers and has a strange mix of kicking and blows of very short distance and an efficient long-distance combat – each character has a very defined range and combat style that makes it easy not only to distinguish them from each other, but to know What’s more with us, attending to the game style they favor. We are more to play at a distance, body to body, focusing on the air game or zone control, there will always be a character that suits our style.

The problem is that, beyond curiosity and the relative accessibility of the game, it is difficult to find reasons to enter the game. For those who are adepts to the anime slope of the fighting game, the game lacks the depth they can find in titles such as Guilty Gear or Under Night In-Birth. For those who are curious about the game and do not normally play games of this type, the lack of a competent tutorial mode can be a ballast, although the mechanics are simple enough to learn how to play at least decently without too many problems. In any case, both in mechanics and accessibility, it seems exactly what it is, a game of more than ten years ago in a genre that has evolved by leaps and bounds in all aspects during that time.

This aging does not help that is not a remaster or remake, but an improved version. Graphically lacks muscle, the interface not only seems but is from a Japanese niche game of PS3, and the artistic department has charm, but for many people it will be a manual hit or Miss. Issues that are not necessarily defects, nor will they be any problems for many people, but whose presence is noticed at all times.

For the rest, this version makes a remarkable effort to be accessible for the first time for a new audience. Not to teach how to play, since all the tutorial is literally a manual in-game only accessible in the main menu and not during combat, but in regards to game modes. With an extended story mode, which tells us the struggle of a mysterious organization called Phantom against an evil entity called Mage that deceives young people to participate in his fighting tournament; Online and local functionalities, to play both in ranked and in casual mode, with friends or against the AI; and a solitary mode with multiple options, either to play against the clock, our own score or until the body endures; The game makes a remarkable effort to offer everything possible to the Western public respecting as much as possible the original essence of the game, something that, for some reason that does not end up, includes not introducing rollback because the original games lacked it.

That makes Phantom Breaker: Omnia a difficult beast to judge. As a preservation of a niche title with more than a decade behind, it is an excellent job with little to criticize. As a game, he has aged evidently and it is likely that he does not finish finding an audience or between the community of the fighting games or among the public of the anime games. Therefore, before Phantom Breaker: Omnia, what weighs is curiosity. Whoever looks for the opportunity to experience a game that until now was inaccessible to practically the totality of humanity outside of Japan, this is a gold opportunity to do it. For those who look for the next great fighting game, it will surely do well to look at titles that, after all, are about Giant’s shoulders like this Phantom Breaker: Omnia.