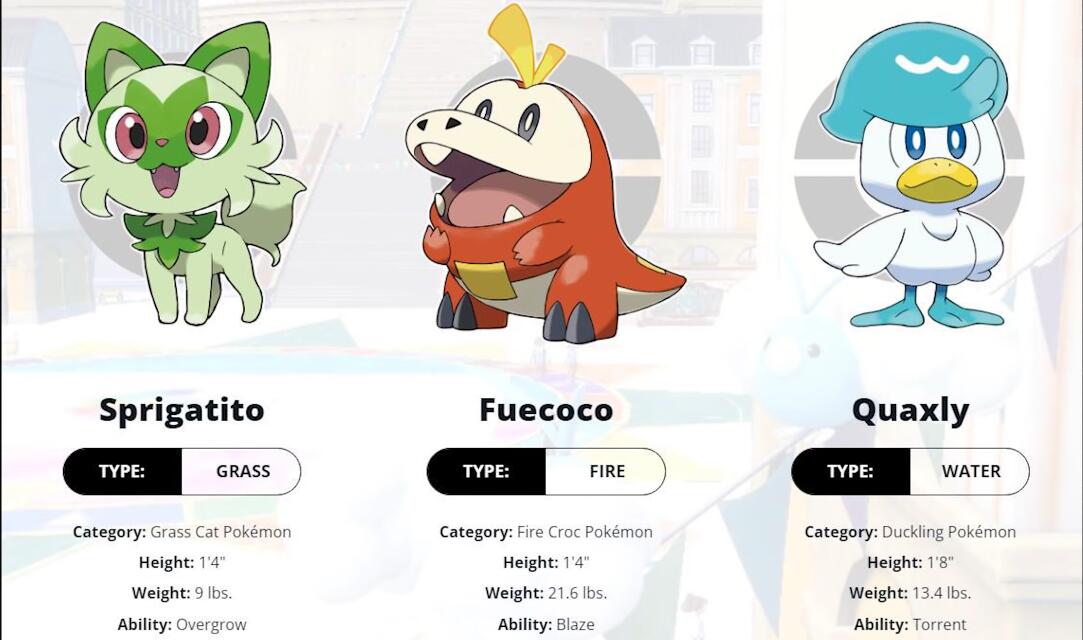 Everything we know about Pokémon Scarlet and Purple, the 9th Generation

Pokémon Scarlet and Purple have been officially revealed, going in a new direction for Game Freak’s main series. We know about the 9th Generation Pokemon, including the release window, location, and starters.

On Pokémon Day 2022, February 27, the 9th Generation was announced. With many expecting nothing more than an Arceus Legends update, fans were shocked when Pokémon Scarlet and Pokémon Purple were revealed.
With an all-new open-world location (yes, open world!), starters, and more in Pokémon Scarlet and Purple, trainers have a lot to digest in the latest region.

Announced Pokémon Scarlet and Pokémon Purple, the titles of the 9th Generation

The launch of the 9th Generation has already been officially announced, with Pokémon Scarlet and Pokémon Purple. The ninth Generation will bring us a hybrid-style game, maintaining the original essence of the saga but also changing to open exploration environments similar to what we have seen in Arceus Pokémon Legends. Unlike this, Pokémon Purple and Scarlet will be based in a modern era.

We will be able to see the wild Pokémon in different environments, but everything will be more detailed. Of course, the images shown do not seem to be the definitive ones of the game, which still has some work ahead of it.

Trailer and gameplay
The February 27 reveal trailer shows a glimpse of the sprawling landscape of the new open-world region, giving players an idea of ​​what the location will look like during the day, evening, and night.
It’s filled with lush greenery, and a plethora of wild Pokémon, with Zoroark from the Hisui region, confirmed to be in the game and fan favorites from other generations like Lucario, Larvitar, and Seviper.
A city with a giant tower in the middle (what could this be?) is also shown, as well as the male lead, his house, and his bedroom.

Is there a release date for Pokémon Scarlet and Purple?
No concrete release date has yet been set at the time of writing, but we know it will be released in late 2022.
Based on previous major releases, it is likely to launch in November 2022. It may also fall on a Thursday or Friday like other entries in the series.
Of course, it’s just speculation at the moment, so we’ll update you with the official confirmation once we know.

The starter Pokémon of the 9th Generation
We know the starters of the 9th Generation: Sprigatito, Fuecoco, and Quality.
Sprigatito is Grass-type, and its ability is Thickness. Fuoco is Fire Type, and his ability is Flame Sea. Lastly, Water’s duckling, Quality, has Torrent as an ability.
A 4chan leak making the rounds on Reddit suggests that Sprigatito will evolve into a Grass/Electric-type Saber-Toothed Tiger Pokémon with lightning-shaped fangs.
He says that Fuecoco will get a more snake-like body shape and be Fire/Dragon. Finally, he states that Quaxly’s latest evolution will resemble some navy admiral and use feathers as swords. It will be a Water/Fighting-type Pokemon.
While we’re often skeptical of 4chan leaks, it’s worth noting that many of the Pokemon Sword and Shield leaks were accurate. Anyway, nothing is fully confirmed until it is officially shown.

New Legendary Pokemon
In the official announcement, nothing was known about the legendary Pokémon (or mythical) of the 9th Generation. However, some fans noticed that the trailer featured two shield emblems on a wall with an orange and grape logo. The fruit could also be seen in a bowl on a table. This has led some to speculate that this is a hint about the Legendaries on the official cover art.
The earlier 4chan leak shared on Reddit suggests that “Two Legendaries have an animal-like appearance, similar to reptiles, but are more abstract. Scarlet’s will be a Fairy/Fire-type with a quadrupedal stance with translucent scarlet scales, and the second is a Fairy/Psychic-type with a purple and gray bipedal stance with a series of purple glass spheres along the back.
He says The third Legendary is a Dragon/Dark. It is a black wyvern with red eyes and bright red wings, and it will have the ability to reverse its weaknesses and resistances.
Again, we tell you that these leaks may not correspond to official information.