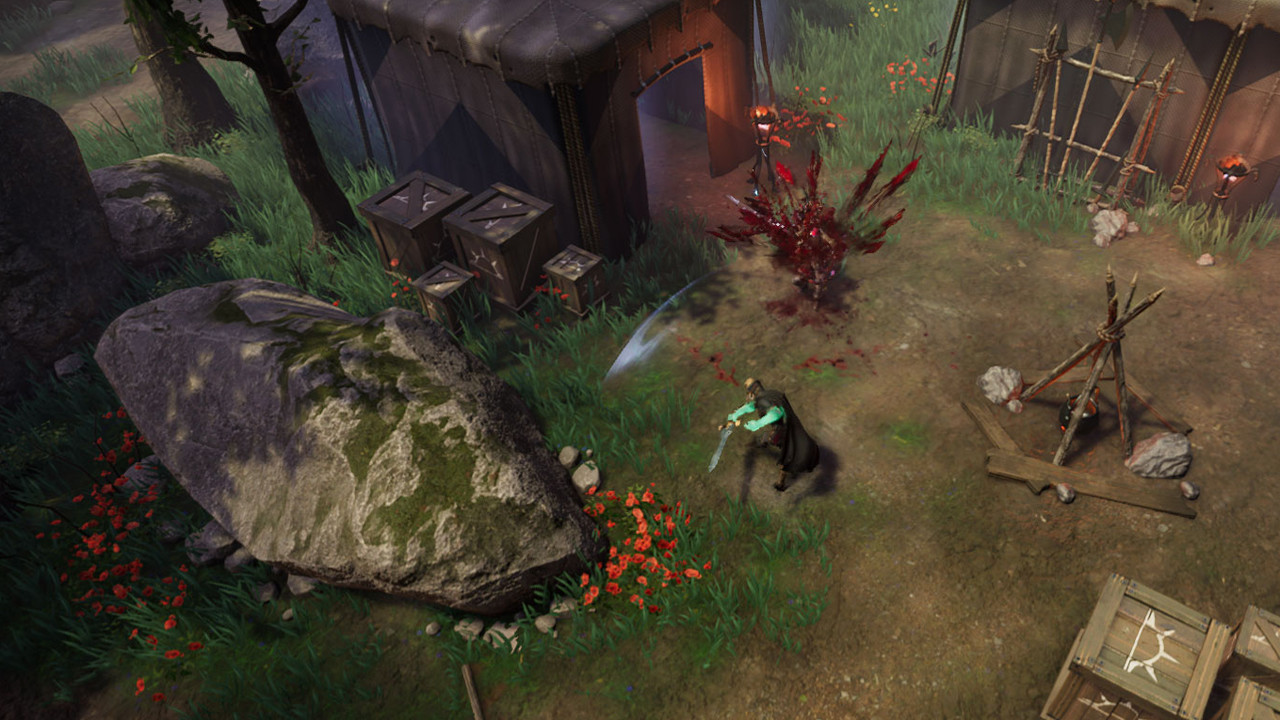 V Rising Gameplay Classes, weapons, and The tricks of combat

Now that you have enough leather to make your first decent armor, we can talk about weapons and fighting. From the different blood type classes to fighting bosses, here is our complete guide to the game.

V Rising has a massive amount of content, and to hope to explore it at its highest item level, we’ll need to consider its combat portion seriously. It seems evident that we are pretty far from a hack & slash and that it is instead a kind of mix between fights of the MOBA genre and traces of MMOs, although the combat needs time to gain depth.

Gameplay that takes time to open up
V Rising’s gameplay may not appeal to you at first: it’s pretty simple and without much variety until you get to the iron weapons. At this point, the game will introduce mechanics that get richer over time during your first 30 hours.

If you doubt the potential of the gameplay, stick with the missions a bit, and you’ll see that Stunlock Studios’ title has incredible things to offer on the combat side.

Character creation: create your class from A to Z
At the risk of repeating ourselves, V Rising has a lot of mechanics in common with Stunlock’s 100% PvP game Battlerite. So much so that you can fully reproduce the build of the latter’s characters in Survival.

It will be necessary to play 20-25 hours for all the skill slots to be filled since achieving the first ultimately is completed with a boss that needs item level 35-40. But once you have what you need, the build possibilities are excellent. Especially since there is also a way to create synergies for group play: continuously experimenting with combinations will allow you to find the gameplay that suits you and your clan.

Weapons and Powers
Weapon classes will get new and new moves as you progress through the castle. Sword, mace, and axes are joined by scythes, sickles, ranged weapons, etc. Likewise, upgrading material levels will unlock additional attacks (copper and iron).

The game won’t take you by the hand with endless tooltips, and it’s up to you to try whatever comes your way. Finally, the armors all have bonuses, with a classic accumulation of effects according to the number of pieces equipped simultaneously.

Blood group class and bonuses
That’s very interesting, and the game never explains it. When you mouse over an enemy, you will see their class next to a percentage: this data tells you the quality of the blood that will be sucked, and the higher it is, the more bonuses associated with the class you will unlock.

We recommend that you watch the video attached to the article to fully understand the system: by sucking this soldier with 95% raw blood, we managed to unlock almost all the bonuses for this class. The quality levels are in this order. Blood types can be stored in the iron level prisoners’ castle.

Day and night
Never face a boss in broad daylight if you’re outdoors: some graveyards are shrouded in permanent fog, which is great for vampires, but in the woods, you can get fried. Wait for nightfall and keep an eye out for blood moons. This will significantly improve the passive effects of blood types.

Measure the threat
The level difference prompts are similar to those in an MMORPG except for one thing. If it’s gray, you’ll get by without too much trouble. On the other hand, if you see a skull, it is almost sure that you will not be able to win. The color code also includes shades of yellow and orange, which can tell you what level of preparation you’ll need before you jump into combat.

Attack placement and rotation
Placement – ​​If you’ve ever played Battlerite, you’ll know how vital order is to Stunlock Studios games. Always think about the angle of your attacks to hit as many enemies as possible. The further you progress, the more you realize the importance of crowd control, so you might as well practice using it early on.
Attack Rotation: Basic hits are doomed to fail on bosses above level 30-35, and just like in an MMO, you’ll have to learn the order in which you’ll use your abilities, even if you have to adapt patterns of the bosses quickly.

How to heal well
Another mechanism that is not necessarily easy to understand at first. Healing is not automatic in V Rising, and to use the blood supply, you will have to stand still for a long regeneration time.
Later, the amount of HP regenerated will improve thanks to the equipment, and you will be able to use the potions from your alchemy table to access more direct healing without having to pump your precious blood. Another type of passive healing is the one granted by the bear form, which is very useful when you want to regenerate while exploring. One word of warning, though, don’t eat the hearts intact.

Boss fights
Blood Bearers V will be your main enemy as you progress through the world. You will prepare to fight against them, and they will also be the ones that will mark the construction of your castle, thanks to the many crafting recipes they drop.
The higher your item level (or ilvl), the more bosses you have to hunt. As you can imagine, the difficulty of the encounters will crescendo, starting with wolves and ordinary humans, and ending with vampire hunters who will give you a hard time.
Around ilvl 40, things start to get serious, and the threat posed by some of these enemies will require you to apply little strategies.