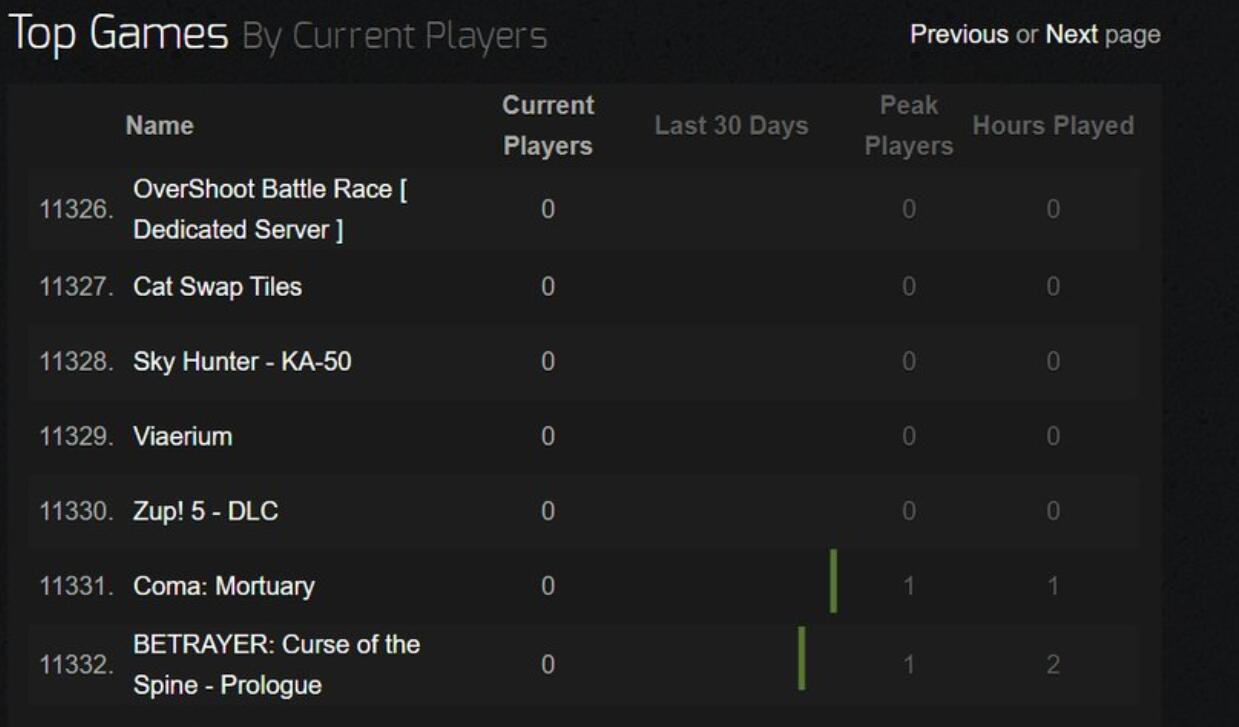 Which are the no-one touches games At the bottom of the Steam charts?

I’ve been trawling the bottom of the Steam charts for games to more or less randomly pick out games that are enjoying 0 active players. I excluded titles with one or more players in the last 24 hours. The inevitable, unplayably broken shooters with some zombie assets from the Unity Store are already getting more attention elsewhere than they deserve, so I don’t have to help.

In the following, I present seven games that meet all the criteria and look attractive at first glance. These games don’t have to be wrong; I don’t find them particularly interesting. Interesting does not necessarily mean entertaining or good, but see for yourself.

Bomb chicken
Bomb Chicken (not to be confused with Chicken Bomb ) is the most expensive game on this list but also the most valuable. I’m surprised that it hit its all-time peak of a paltry 30 players two years ago and hasn’t been played by anyone since.

You play as a chicken that lays bombs instead of eggs. With these bombs, you defeat enemies, blast away obstacles and move vertically through the levels. Otherwise, your chicken can only run to the left or right, and it is not allowed to jump, peck or do anything else that chickens usually do.

At the push of a button, you plant bombs that appear directly under your rump. Repeatedly pounding the keys will cause the explosives to stack under your butt, allowing you to reach higher platforms.

If you come into contact with traps, enemies, or the explosions of your bombs, you will immediately die. If you breathe out all virtual lives, you start the individual level from the beginning. The part has a great graphic style, is well animated, and has many visual gags.

It’s also great to play with a gamepad. Bomb Chicken starts leisurely, but the puzzles in each room quickly become more challenging and the jump passages faster.

If you like good pixel art, like to run for your life and use your brain in the process, Bomb Chicken is worth a look. Not bad if you like the genre! The game was also released for Nintendo Switch, and I knew nothing about the Steam release until this article – just like the rest of the world.

ComixPlay #1: The Endless Incident
You are flipping through a 124-page superhero comic. ComixPlay is my proof that interesting doesn’t necessarily mean fun. Artists from Marvel, DC, Arcana, and Zenescope worked on the artwork and story.

The part is smartly drawn, and the plot revolves around futuristic heroes fighting robots and aliens. In JRPG-style turn-based combat, you’ll use their attacks and special abilities, change formations, and switch characters on the battlefield. Whenever there is combat in the story, you stop reading and take control of the heroes.

There are three different levels of difficulty, and you can skip it entirely if you wish – then you just read a comic silently for under seven euros. There is some background music, but you don’t get any speakers here.

The game idea is quite lovely, the designs of the superheroes and enemies have a certain charm, but in the end, the game doesn’t offer anything that captivates for a long time. The characters are just not that exciting. The fights in between are pretty simple and quickly become monotonous because they always take place in several uninterrupted waves.

You always read a few pages of the comic, beat away half a dozen hordes of enemies, then read again, and so on. You can skip the fights if you wish – a clear sign of their quality!

The game once enjoyed 143 simultaneous players, but it has never surpassed two players in the last four years. Despite the #1 in the title, there was never a successor.

Dungeons of Trials
This maximally condensed dungeon crawler is a bit like Etrian Odyssey or the Japanese Wizardry offshoots, only very cheap. You control a party of four in first-person perspective through three-dimensional dungeons.

From time to time, you will be attacked by monsters, then you give your adventurers orders in rounds and let them fight and cast magic while ideally not being wholly beaten up by the demons.

The game starts brutally difficult and finishes you off mercilessly, but you loot gold from plundered treasure chests and win battles, which you use to improve the premises of the adventurers’ guild. New training rooms increase the level of your heroes, and a blacksmith equips them with new weapons, better quarters attract adventurers with new character classes, and so on.

Gradually you will be equipped more and more, have access to more classes, skills, and spells, and penetrate deeper and deeper into the dungeon. I had more fun with this game than I expected because the gameplay loop of typical Japanese dungeon crawlers is there and works perfectly.

However, you have to adjust your expectations to the nominal purchase price:
The 3D graphics are terrible.
The monster sprites are game-maker assets.
The upgrading of the invisible adventurers’ guild is only possible via text.

You don’t give your adventurer’s names; one portrait is fixed for each class. Equipment scales automatically with guild upgrades and cannot be adjusted manually. It doesn’t get any more minimalist than this. After four to six hours, you’ll have completed the first dungeon.

Despite an all-time peak of just two players, the part even got a content update in the form of more dungeon floors. I like Japanese dungeon crawlers and was happy with it for the dime price. But you have to be hardy to have fun here.

Steel Alcimus – Steam Edition
Steel Alcimus offers helicopter action with the look and sound of a C-64 game. I know that sounds scary and doesn’t look like anything on screenshots, but the thing is fun.

In a campaign comprising 35 missions, you use a combat helicopter to flatten numerous targets on the ground and in the air, rescue prisoners of war, collect fuel canisters for your carrier ship, and fire an arsenal of bombs and rockets, in addition to your powerful onboard cannon.

The gameplay is blazing fast, the combat is great fun, and if you’ve had enough of the campaign, there’s Raid Mode, which you can play indefinitely.

Whether using the keyboard or gamepad, the Steel Alcimus flies as complicated as a combat helicopter: take off, land, fly sideways, switch weapons, pick up items, fire countermeasures for enemy missiles – there’s a lot to master here. In addition to a high tolerance limit for prehistoric graphics, you should plan some time to get used to the controls. There are tutorials for this in the game, but you must like a bit of depth. Otherwise, you’re in the wrong place here.

I liked Steel Alcimus, and a year and a half ago, it even had a whopping 105 players simultaneously. It’s floating around at 0 now, but for the few cents, I don’t care.

For the same price, you can get the sequel, Hornet Virus: Steel Alcimus II. It has primitive 3D graphics and has been delighting three players on Steam for two years.

SpiderPonds
Spider Ponds is a unique, clever, but potentially frustrating game. You control a spider and spin webs in which you catch other insects to eat. If you rappel down a blade of grass or a branch with your spider silk, you can also swing back and forth and move through the game world.

On your adventure, you will encounter other spiders, frogs, snails, and other creatures that can be dangerous to you. For example, if you help yourself from another spider’s web, you’ll kick it out, and in the worst case, you’ll end up in a pond or at the feet of a hungry frog.

If you get eaten or drowned, your spider will reappear shortly at one of the many generously placed checkpoints. You can’t lose.

The game aims to follow a small creature that talks to you to the other end of the game world. Depending on your skill, this will take between 30 and 45 minutes.

Your biggest enemy is the game controls. Your mouse pointer is an arrow. Click to set the direction you want your spider to move. But it tends to follow very sluggishly and imprecisely, especially if you spin your webs too complicated.

With the X button, your butt creates a thread that you make longer and shorter with the mouse wheel. It took me a while to get some control over the fiddly controls. If you get over this frustration threshold, you can get a funny little game in between with a simple but friendly graphic style and fun gameplay for under three euros.

Ukhar
Ukhar is my highlight on this list and worth every 99 cents! You smash your way through monster-infested dungeons from a bird’s-eye view, avoid traps, solve simple puzzles, collect gold for better weapons and upgrades, crush big bosses and save your sweetheart Neia, who was kidnapped by the nasty necromancer Kairos.

This plays like something between The Legend of Zelda for NES and Gauntlet looks like a game for the Amiga 500 and covers a total of 22 levels in seven different environments.

You hit it with your keyboard or gamepad, dodge rolls on the floor, and throw axes at your enemies. The controls are a bit fiddly. If you don’t press the directional button when attacking your opponent, Ukhar will often swing your weapon around randomly and miss.

The sound effects are a bit tinny and cheap; luckily, the weak soundtrack can also be switched off. For a ridiculous 99 cents, I don’t care because the dungeon carnage is fun, the boss fights are excellent, and the different weapons and hidden goodies motivate my curiosity. At his peak, Ukhar had seven players at once – and deserved every single one.

Warlike
In Warlike, you play one of three different heroes and work your way to the end of a randomly generated world map. On the map, you will encounter robbers, undead, and Greenskins who want to get their hands on you. In combat, you send your units onto the battlefield against your enemy’s troops and watch as both armies brawl in real time.

You can only intervene with a limited hero ability that strengthens your units, weakens opponents, or calls for reinforcements, depending on your chosen main character. From time to time, you will also come across merchants where you can upgrade troops or buy new units if you have the means.

The game gives you a path through the world. If you reach the goal on the world map, you have to win a challenging boss fight. You can deviate from that, and then the random number generator will make your life hell.

I was regularly deducted gold and units for trips into the undergrowth, and the risk was rarely worth it. At the same time, my army was always too weak towards the end to win the final battle.

Warlike has some excellent ideas, and the real-time battles are fun to watch. Despite the short fights, a game session only lasts a few minutes. It’s not a bad game. With some tweaking, it could even be okay. But nobody has touched it since January. The maximum number of players was four. It’s in good hands at the end of the Steam charts.